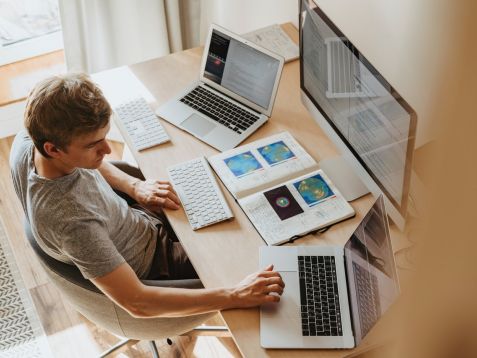 International internet technology and research company Gemius has reviewed data about internet usage tendencies in Estonia in 2020. The average number of Real Users from mobile phones per month has increased by 52 000 last year, but the number of users from computers – by 14 000.

According to gemiusAudience data, in 2020 the average number of Real Users from all platforms together (computers, mobile phones, and tablets together) per month in Estonia was 842 000 and has increased by 18 000 users or by 2 percent. On average there were around 699 000 internet users from computers, 695 000 – from mobile phones, but 214 000 used tablets to browse the web. Compared to 2019, the number of Real Users from mobile phones per month has increased by 52 000 or by 7 percent, meanwhile the number of users from computers - increased by 14 000 or by 2 percent. Of all Estonian internet user’s half were females, but 50 percent – males. It should be noted that the gemiusAudience study in Estonia includes data on Internet users aged 15-74.

One Real User has browsed the internet for about 11 hours from computers, 5 hours from mobile phones and 2 hours from tablets every month. The average time spent per user significantly increased in March and April, when news about Covid-19 and following restrictions in the Baltic States appeared in the media. If in January and February one user spent about 14 hours on the internet from all devices, then in March this number was up to 21 hours, but in April – 18 hours from PC and mobile devices together.

gemiusAudience is based on data about internet audience that is aged between 15 and 74 years of age, is from the territory of Estonian state and visit sites from computers, mobile phones, and tablets. gemiusAudience research is based on a complex and modern methodology that allows to see the number of real persons (Real Users) within a page, rather than looking at cookies or IP addresses that do not show the number of actual persons visiting the relevant page. To sign up for gemiusAudience research or to find out more information about it please write to kontakt@gemius.ee.